The common stack I am currently using to build SharePoint Online solutions generally consists of the following components:

This stack allows automated deployment of the project against a continuous integration (CI) environment. Simple migration scripts (written in PowerShell) are cumulatively run against the environment, and can be easily promoted to a UAT and then Production environment. 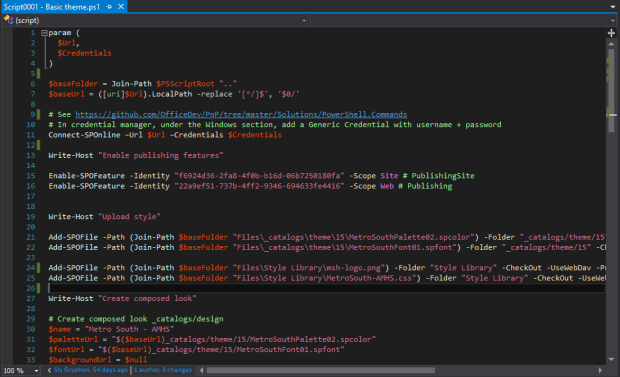 END_OF_DOCUMENT_TOKEN_TO_BE_REPLACED

.NET 4 – Alex Mackey
This is a broad topic to cover in only 1 hour, and what is important will vary depending on what areas you work. Alex did a good job of covering some of the essentials (such as the new runtime and side-by-side deployment) as well as some of the cooler features. Things like co-variance / contra-variance may have gone over the heads of some of the audience, but the presentation as a whole was well done.
The actual presentation itself was also very punchy, with good use of images (a bit of humour helps keep things interesting) and hilighting of the important parts of slides. Plenty of good demo code as well.
Lessons learned from agile – Richard Banks
Some valueable recommendations "from the trenches", although I don’t know if the limited number of slides quite worked. I presume the intention was to make it more conversational, but (for me at least) it did seem a bit lacking. The content fit the ALM side of the conference well.
Build framework enhancements – Stephen Godbold
Continuous integration, or at least daily builds, is a key element / best practice in any modern development practice, and it is good to see the enhancements in this area. There is a good story around extensibility, which the demos showed well, although I do worry whether a workflow based solution is getting too complex (compared to a simple build script.)
Still, even the out-of-the-box features seem a big step forward. The presentation also demonstrated some good practices, e.g. unit testing of custom build enhancements.
Introducing ALM to SharePoint – Jeremy Thake
Having led SharePoint development in the early days of MOSS 2007 the developer experience was pretty much a complete disaster. Ah, the simple joy of being able to hit F5 and debug into a SharePoint component, and on a workstation OS!, or of having a build server deliver a SharePoint deployment package (without third party tools and custom scripts).
The improvements may have been lost on those in the audience who hadn’t struggled with MOSS before, but the presentation did a good job of relating the experience back to the central theme of ALM. Hopefully it convinced those present that SharePoint was now a more viable option.
Agile Database Development – Peter Ward
This presentation was a bit of a disappointment. It failed to deliver on some of the promised content (e.g. unit testing of T-SQL was not covered), and, while it did mention integration with TFS and other ALM features, these weren’t really shown in the demonstrations.
I think demos similar to the Build framework enhancements, showing actual integration with continuous builds, etc would have been better. There was discussion in the talk, but no demo.
Windows Phone 7 Development – Dave Glover
An interesting presentation to end the conference. The XNA demo suffered from technical problems, which did disrupt the flow, but the presenters managed to carry on regardless and did a decent job. Windows Phone 7 will be an interesting platform to watch, but is obviously a version 1 product (e.g. no plans for cut & paste).
The presentation was also quite a different style than others — a long list of discussion points and links to other content, rather than a set of slides, but I think it worked well for the content.

I spent the day at the inaugural Australian ALM conference today. Here are some impressions from the sessions I attended:
VS 2010 launch – Microsoft
VS is maturing a lot as a testing platform (automation, bug tracking), and this was featured in both Sam & Tanuj’s portions of the launch. The launch event was free, and had a lot more attendees than the later conference portion. Handouts include a neat pack of planning poker cards with Microsoft branding.
Keynote – Dr Ivar Jacobsen
I’ve written before about Ivar’s comments on Method Needs Theory, and it was great to hear him talk. His recent work on Essential Unified Process is available as a VS 2010 process template, with Use Cases, Use Case Modules, etc. It is a good reminder to hear from one of the earlier pioneers of iterative and other best practices just how long these concepts have been around, and the need to be aware when concepts like agile become overloaded with hype.
Personally, I prefer the structure that Use Cases give, compared to ‘epics’ and ‘themes’ in the User Stories world, particular the early focus on system boundaries, stakeholders and goals to give meaningful context. Like any other methodology UP (Unified Process) can be easily abused, e.g. hundreds ‘use cases’ instead of the 10-12 that a typical system should have.
VS2010 IDE Enhancements – Alex Mackay
A grab-bag of some of the new features in VS, with some quirky examples of extensions. Fairly limited in what you can get through in 1 hour, but plenty of good practical examples. The session was presented well, and the audience seemed to like it a lot.
Sketchflow – Mitch Denny
In the first half Mitch used an interesting presentation tool, Prezi, that I hadn’t seen before. I worked kind of like a mind-map, drilling down into different ‘slides’ as necessary. The second half had plenty of demos, but it might have worked better with more switching between slides & demos, rather than two separate halfs.
I very much like Sketchflow, especially using sketchy styles for prototypes, but I don’t know how well it will grab on as a separate tool. Hopefully it will gain traction in the designer community, but the interface is quite different for someone used to a coding tool like VS.
Introducing Agile: Microsoft Developer Division – Sam Guckenheimer
An old presentation (although I hadn’t seen it before), mostly on the use of agile practices to deliver VS 2008. It did seem a bit dated, but had a good chunk of information (but no demos — nothing really relevant to demo). Definitely more ALM than VS.

A kernel of software engineering practices

Ivar Jacobson has written some recent columns for Dr Dobb’s Journal about the similarities between different development methodologies, and specifically the difference between processes and individual practices.

The thread has picked up and gain some momentum through columns by other well known industry figures such as Scott Ambler:

A key part of Ivar’s proposal is that what’s really important is not so much the overall method but the individual practices.

This is similar to Steve McConnell’s analysis,  in Code Complete Second Edition, of the improved defect removal rates of methodologies such as Extreme Programming, which are really just the expected effect of the combined individual practices.

Ivar also talks about a "kernel" of practices — activity and work patten spaces (groupings) and "alphas" (prototypical deliverables). Without going through the detail of EssUP (Ivar’s lightweight method based on this), the kernel consists of the following:

Different processes, e.g. EssUP, Scrum, MSF, etc, can then be mapped to this kernel of concepts.